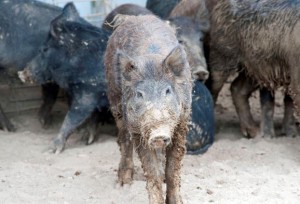 ALBUQUERQUE — Do all hogs go to heaven? The feds are giving New Mexico $1 million to send them there.

City folks may chuckle when talk turns to the growth of the feral hog population in the Land of Enchantment, but for people in rural areas, the big, burly and boisterous pigs are no laughing matter.

The U.S. government, which estimates some 5 million feral hogs cause about $1.5 billion in damage in 38 states across the country, is giving New Mexico $1 million from a contingency fund from the U.S. Department of Agriculture to establish a pilot program to thin their population.

“We wanted to get a handle on this before the numbers got out of control,” Alan May, USDA state director of wildlife services, said at a news conference Monday. “We’re taking the bull by the horns.”

Or the pig by the snout.

Although May said he didn’t have a precise number of the feral hogs in New Mexico, he said their rangeland has grown from two counties in New Mexico to 17 since 2005.

“Eliminating them is incredibly important” because the hogs destroy property, gobble up wildlife habitat, steal water and grassland used by livestock and spread disease, May said.

“They carry 33 infectious diseases,” State Land Commissioner Ray Powell told New Mexico Watchdog. “Bacterial, viral and parasite diseases that can be transmitted to our agricultural animals, to wildlife and to us human beings. So these are a real threat to the health and security of our economy in the state.”

Most of the hogs are found in the eastern half of New Mexico and like to gather near rivers, creeks and streams. Many of the pigs, which are about three feet tall and can weigh more than 100 pounds, come to New Mexico from Texas, which has grappled with the problem for years and barely made a dent.

It’s estimated there are 2.5 million feral pigs in Texas and scientists at Texas A&M University have mapped their expansion across 134 million acres, or 79 percent of the state.

That’s prompted Texas officials to promote hunting the hogs, but Jim Lane, director of the New Mexico Game and Fish Department, said, “We haven’t looked at hunting as a tool” to curb the population.

In New Mexico, the hogs are often trapped, examined and euthanized, but more aggressive tactics are also used. For example, marksmen sometimes shoot the hogs form helicopters, while in other cases radio telemetry collars are attached to hogs to determine where packs are assembling. An estimated 400 hogs have been killed so far.

“It’s really a clean-up operation,” Lane said, adding that in addition to the $1 million USDA funding, Game and Fish has spent $250,000 of its own budget to eliminate the hogs.

“I guarantee you, they will eat anything,” said Bill Humphries, a rancher in Quay County and a member of the New Mexico Cattle Growers Association. “I can attest to how intelligent they are, how quickly they adapt and how evasive they can be.”

Among the wildlife the feral hogs feast on is the Lesser Prairie Chicken and the Dunes Sagebrush Lizard, two species the state has successfully petitioned the federal government from putting on the endangered list. “It’s important we control these feral hogs because of their impact on these two species,” Powell said.

Edward Avalos of the USDA said officials are optimistic the $1 million allotment in New Mexico will produce results that could be emulated elsewhere across the country. “I think we’re on our way to success,” Avalos said.

But if we don’t have precise numbers of how many feral hogs are in New Mexico, how do we determine success?

Here’s a map tracking the incidents of feral swine diseases in the state from the USDA and the National Wildlife Research Center:

And here’s video of Powell talking about the feral hogs, which he refers to as “vacuum cleaners”:

Click here to LEARN HOW TO STEAL OUR STUFF!